The volunteer fire company is always looking for new members!

If you have ever thought of doing something great for the community, check us out! Free training, free gear, and uniforms. Make new friends, meet your neighbors, and learn something new. It’s never too late to volunteer. If you are interested, please fill out an application.

Read All News
Please click on link below for instructions on how to apply for Firefighter/EMT Employment Testing. Firefighter/EMT Employment Also check the Plainsboro Fire Company Facebook page for the announcement as well....Read More
The Plainsboro Fire District is hiring for per diem firefighters. See links below for additional information and the application. per diem notice Per Diem Application
First Responders to Escort St. Nick through Plainsboro on Saturday WE ARE POSTPONING UNTIL SUNDAY DECEMBER 19 AT 2 PM Annual Early Visit Scheduled for December 18 PLAINSBORO – Santa...Read More
FEMA and FCC Plan Nationwide Emergency Alert Test for Aug. 11 Test Messages Will be Sent to TVs and Radios Along with Select Cell Phones That Have Opted-in to Receive...Read More
NOTICE OF SPECIAL MEETING PLEASE TAKE NOTICE that the Commissioners of Fire District No. 1 in the Township of Plainsboro, County of Middlesex, shall hold a special meeting on Tuesday,...Read More

Please see the attached flyer for an event October 9th that will raise money for the towns emergency services! ... See MoreSee Less

Plainsboro Fire District #1 seeks to establish a list of eligible candidates for the position of Full-time Firefighter/EMT.

For those candidates interested, please carefully read and follow the directions listed on the attached announcement. ... See MoreSee Less

The Plainsboro Volunteer Fire Company, No.1 was organized on November 1, 1959. 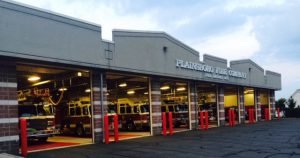 There were 12 Charter members who took part in the organization. The Fire Company was incorporated on February 16, 1960, and on June 18, 1960 the fire company went into full operation. Our first truck was a used 1940 American LaFrance pumper. It was 500 gallon per minute pumper with a 160 gallon booster tank. The booster tank was later increased to hold 500 gallons of water.