The Plainsboro Volunteer Fire Company, No.1 was organized on November 1, 1959. There were 12 Charter members who took part in the organization. The Fire Company was incorporated on February 16, 1960, and on June 18, 1960 the fire company went into full operation. Our first truck was a used 1940 American LaFrance pumper. It was 500 gallon per minute pumper with a 160 gallon booster tank. The booster tank was later increased to hold 500 gallons of water. 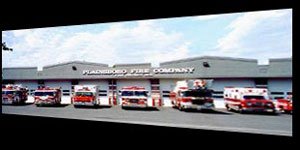 The first officers of the Plainsboro Volunteer Fire Company were:

The original fire house was the cinder block building still located behind the Plainsboro Hardware Store. During the winter months, the building was heated by a coal fired pipeless heater to keep the water in the fire trucks from freezing.

In July 1962 the fire company moved to our present location. The land at this location was donated by the Wicoff Family and Walker Gordon Farms. The carpentry and masonry work for the fire house was contracted out and paid for by donations from the residents of Plainsboro. All work on the new fire house was done by members and friends of the fire company who were willing to donate time and the badly needed skills. Mr. Bob Cherrington did all the electrical work and Ted Wagner Sr. father of our members Roy and Ted Wagner did all the plumbing work. Simonson Brothers, Princeton Nurseries, Donald Everett and James Crammer supplied bulldozers and front end loaders to help grade the lot around the fire house.

Walker Gordon Farms supplied the fire company with its first fire alarm system. The stationary fireman on duty at the farm acted as dispatcher and would blow the steam whistle when someone reported a fire. Many of the fireman could hear the whistle but many others were alerted by telephone cans from other firemen’s wives who were at home and could hear the whistle.

Wow big difference from when I was a lowly captain